Wanna go off the beaten track? How’s the sky for an idea? 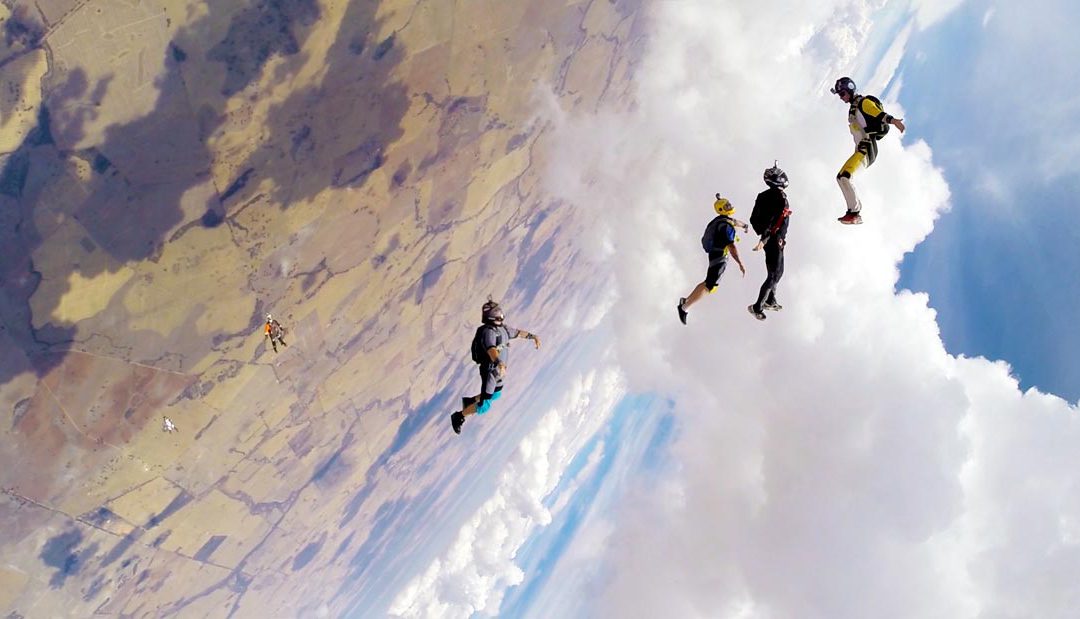 In 1797 Andre-Jacques Garnerin strapped a large bedsheet to a basket with a balloon to elevate it to the desired height, cut the cord and returned jolting to earth. He officially invented skydiving and even got a google doodle for it. In 1919 Lesie Irvin developed his own basketless parachute for his job in the Californian film industry, which was such a success that it kicked off The Irving Air Chutes Company. IACC’s parachutes saved over 10000 lives during WW2. It’s pretty amazing how far back skydiving goes in history (check out Da Vinci’s parachute) and beginnings may have been humble, but where it’s come from since is just as amazing.

6 months ago we thought it was all base-jumpers and ex-army tandem masters taking backpacker thrill seekers for a quick plane ride and plummet, but it turns out there is so much more fun to have in the sky than we could ever have imagined. We’ve met stuntmen with wingsuits honing their flying styles for the next red bull ad, or fun jumpers that fly at night, enjoying the stars, twinkling city lights and amazing views at full moon. Apart from the standard tummy-down banana positioning, with a little experience and training you can move around in the sky a lot more than just straight down. Freefliers can often be seen practicing standing or sitting in freefall, or laying on their backs, or hanging upside down. Check out camera flier Helmi in the Byron video. You can take freefall to the extreme and fly ‘style’, which is basically freefall’s sprinting equivalent. Build up maximum speed, complete a pre-arranged set of manoeuvres in the fasted time possible (6 seconds for world champions) and get evaluated by high-speed camera which gives you points on hundredth of a second intervals.

Another discipline presented at the World Freestyle Competitions is angle flying, which is what Vance (white & yellow), Slatey, (black, blue & yellow) Travis (black) & Jonesey (grey & turquoise) are up to in the shot above. The idea is to fly in formation at the same level and angle as your mates in preparation for three-dimensional flight formations or acrobatic freeflying. Apart from base jumping (we’ll get to that, don’t worry!), formation flying (also known as ‘relative work’ or RV) is probably the most recognizable solo skydiving skill. From groups of 2 to 4 or 44 (known as a 2-way, 4-way, 44-way etc) to a record breaking 400 linked people in freefall above Thailand in 2006, hanging on to your mates in artistic ways at 200km/h needs a lot of practice, planning and coordination but is also breathtaking to behold. Cross country parachuting does what cross country skiing does, but with no skis. Jump out of the plane, open our chute straight away and get as far away from the exit point as you can to win the competition. Accuracy work is quite the opposite, because it doesn’t matter how far you fly as the objective is to land on a target with 2cm diameter and electronic sensors that measure your 1cm increments away from the centre target and award points accordingly.

Canopy piloting or swooping is usually done above a pond, where courses are set up with entry gates that parachutists need to pass through at a very shallow maximum height (sometimes measured by requiring a contestant to trail a foot through the surface of the pond during flight, creating a mini-wake with the tip of the shoe). The course needs to be navigated without being too high or so low you fall in the pond, and competitions run for the three skills of speed (measured at the beginning and end), distance (how far you get after completing the course) and accuracy (how accurate you can land on a target after the course).

Yeah, this all sounds awesome for you mere mortals, but we wanna pull out the big guns. The moment you’ve all been waiting for: Base Jumping. For those of you who think Base Jumping is filming yourself on your gopro crushing your legs after jumping off a cliff to get 10000 hits on youtube to Awolnation’s “Sail”, yeah… we can’t really say you’re wrong. But there are many successful professional base jumpers alive and what goes into it (especially to avoid getting hurt) is pretty fascinating. Base jumping is indeed one of the more radical and dangerous disciplines in parachuting, especially as you don’t exit from a plane with plenty of time to open your chute. Typically, you’ll hurl yourself off four kinds of elevated structures: buildings, antenae, spans (aka beams or bridges) and the earth itself (aka a cliff). Has the name-penny dropped? A huge amount of planning and calculations goes into base jumping as working out how long you need to fall for to gain enough speed for your chute to open but not hit the ground beforehand is rather complex once you take thermals and other environmental factors into account.

If you want to look super-cool but don’t quite have the nerve to let milliseconds decide your fate, you can always skysurf, which basically entails jumping out of a plane with a modified snowboard. In fact, if you are over a very large unpopulated area, you can organize a stuff jump. Take all sorts of stuff on your jump with you. Rubber rafts are popular as you can pose sitting in them (lolz), but bikes, motorcycles, vacuum cleaners, water tanks and inflatable T-Rexes have all been thrown out of the back of aircraft. Honestly, google it, it’s hilarious. Skydivers carefully track away from stuff before opening chutes, and make sure that what you’re taking isn’t incredibly important as it will probably disintegrate as it smashes into the ground at terminal velocity whilst you still sail high above it. All this is a huge amount of fun, if you’re inspired you can easily learn how to solo jump completing a week-long AFF course. If you want to go professional, tandem or camera flying is incredibly rewarding, but we’ll give you a lowdown in a separate post. So don’t think it ends with your first jump, there’s a whole sky out there to explore.