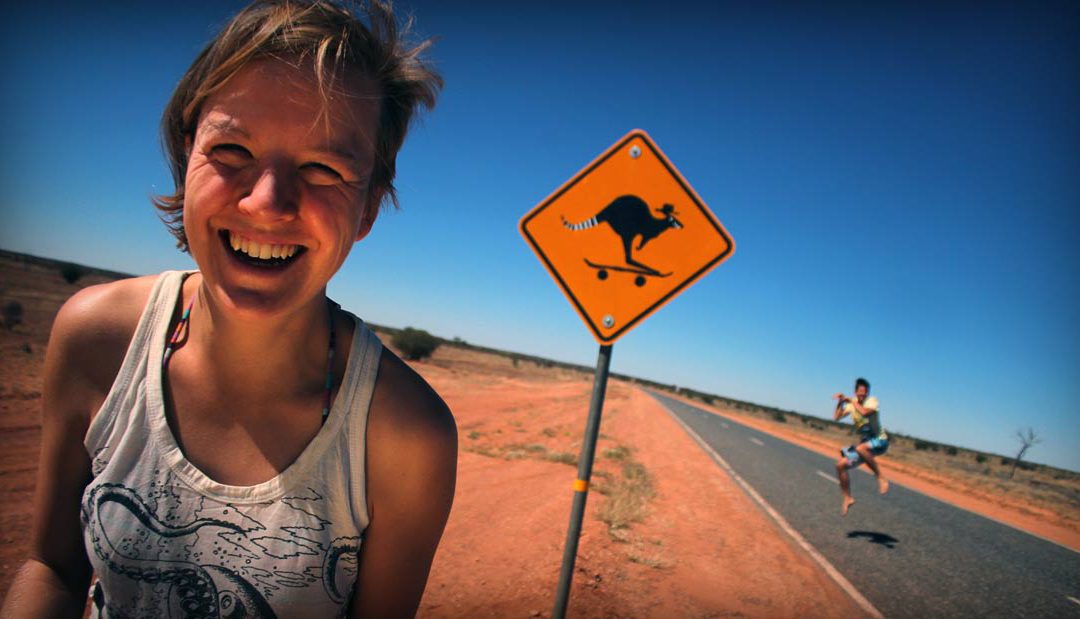 40000km into the Epic Journey and we are looking at our last of 19 countries as its enormous expanse hits the horizon and continues for thousands of miles beyond. We have made it to Australia. And if we weren’t excited enough already, we are also admiring the silhouette of our newest travel buddy as he stands against the sunrise. Let us introduce Rhino, our Mighty Campervan, who we will be shooting, driving, cooking and sleeping in for the next month all in a mission to capture Australia’s incredible destinations in a suite of seven films for THL. Filled with incredible destinations, awesome people and whacky animals, Australia has some of the world’s most unique experiences to offer. So without further ado, let’s jump right in.

To say that the Mighty Australian Road Trip started with a bang would be an understatement. Suspended in mid water, with only a thin piece of Perspex between herself and a cold-blooded killing machine, a brave backpacker stares transfixed. Face to face with Chopper, a 6 meter long, human-eating Salt Water Crocodile, she hardly manages to suppress the screams as Chopper snaps his enormous jaws tearing apart his lunch just centimetres from where she’s floating, adding some intimidating scratch marks to the plastic human cage.

This is Crocosaurus Cove, slap bang in the centre of Darwin, capital of the Northern Territory, where the brave and reckless enjoy the ultimate inner-city thrill ride by getting close and personal with Northern Australia’s apex predator. Crocosaurus Cove also gave spectators a unique opportunity to have a really good long look at a few really massive crocs, from above and below thanks to huge viewing windows in the sides of the pools, as well as marvelling at how streamline these enormous beasts move through the water, and how big their tails are (!).

If, just like our Rat, you can’t quite believe that these are real live animals, not some incredibly intricate animatronics masterpiece from the latest Godzilla blockbuster, all you need to do is head out about 2 hours from town and meet up with Morgan and Harry Bowman, who were recently published in the NT News as being two of the 50 most interesting people in the state.

The true blue local pair run daily cruises on Adelaide River, ferrying unsuspecting groups out on a small boat with a chest high wire fence around it just to have real life wild crocs spectacularly jump all the way out of the water to grab chunks of meat dangled by Morgan. Ranging from 1.5 meter nipper Bullet, who did his name proud, to 5.5 meter three legged, shark eating celebrity croc Brutus, the river is also home to stunning bird life, which we learned all about whilst Morgan fed a wild kite and kept everyone safe and happy.

We headed on to Lichfield national park with its beautiful waterfalls and impressive termite mounds, which form eerie fields reminiscent of endless grave yards, especially when you see the towering structures clothed with old t-shirts and hats, peaking through the bush at you like patiently watching spirits. In the US, the hills may have eyes, here it’s the termite mounds who are definitely seeing what you’re up to.

An altogether different magical experience awaited us early one morning at Mataranka. Ask a kid to draw a perfect fairy pool in the middle of the outback, and this is the place we arrived at before sunrise to swim in the crystal clear, hot, calmly steaming, thermal pool of Bitter Springs. Another 1000km and 8 hours down the road, we captured Devil’s Marbles at sunset – huge, round, ochre-red geographical rock formations bathed in golden light, and just 10 minutes drive from Wycliffe Well, Australia’s official UFO capital. All those abduction newspaper clippings can’t be made up…

Our final stretch took us to the huge aboriginal statues of a man and a woman, child and goanna at Aileron, Alice Springs and world famous Uluru, or Ayres Rock if you don’t know the original Aboriginal name for this incredible place at the centre of Australia. Learning some of the stories surrounding the rock on the Mala walk along the base of Uluru put this astounding geographical formation into historical, cultural and spiritual context which added hugely to our appreciation of the best known icon of the Red Centre.

With no trip to film per se, Rat, Dragon and Rhino re-traced our steps 1000km through the desert along the Stuart Highway to Three Ways, where a lonely roadhouse with great burgers marked the only westward turn off from an otherwise empty north-south running strip of tarmac. Darwin to Alice is a relatively peaceful drive with little traffic, but we were nevertheless greeted with waves by fellow campers and road trains at least 5 times a day. The turn-off at Three Ways marked the beginning of a real desolate stretch of road, and spectacular scenery to accompany us.

Our first stop was Camooweal on the Queensland boarder, which proudly proclaimed to be 231m above sea level with a population of 310 on a painted plaque outside the town perimeters. The road house that hosted us for the night confirmed this was on a good day, usually there are around 170 fixed residents. Heading further west we followed instructions from Camooweal’s petrol station and set our clocks 1 hour and 5 years forward, as we were now in Queensland.

Through wide open prairies and hilly mine country we arrived in Julia Creek, staying at what was possibly Australia’s friendliest campsite in what is definitely Australia’s friendliest outback town. Just down the road in Richmond, we marvelled at the local collection of dinosaur fossils including an incredibly well preserved Kronosaurus Queenslandicus, one of the largest marine reptiles in the world and with 30cm teeth a definite contender for Australia’s most crazy animal list.

And then, after 5000km of driving from Australia’s most northern city, through the heart of the Red Centre outback and west Queensland’s vast prairies and mining landscapes, our journey westwards comes to an end as we hit the immensity of the big blue Pacific Ocean.